EDP Energias do Brasil is the holding company for a group of companies with a diversified and integrated portfolio incorporating activities in generation, transmition, distribution, commercialization of electric energy and energetic solutions in the Brazilian market.

The distributors, EDP São Paulo and EDP Espírito Santo, serve 3.5 million consumers with a strong concentration in the residential and industrial segments, located in 98 municipalities in the states of São Paulo and Espírito Santo with a concession area of approximately 51 thousand square kilometers.

The Company’s strategic focus is to be be a distinctive operator throughout the value chain. In the generation segment,  EDP participates in projects as: Lajeado HPP (903 MW), Peixe Angical HPP (499 MW), Santo Antônio do Jari HPP (393 MW), Mascarenhas HPP (198 MW), Cachoeira Caldeirão HPP (219 MW) and São Manoel HPP (736 MW), in addition to Pecém I TPP (720 MW). These assets give EDP Brasil the installed capacity of 2.9 GW. 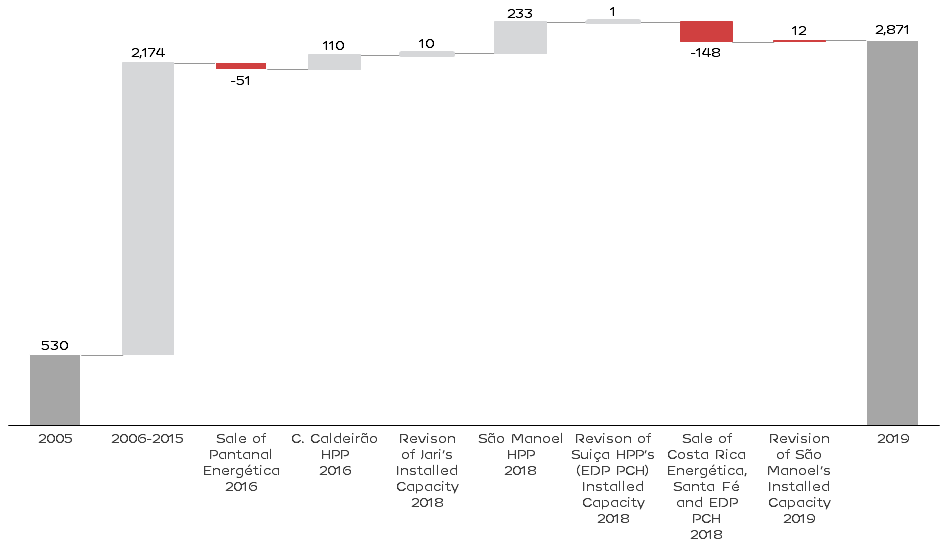 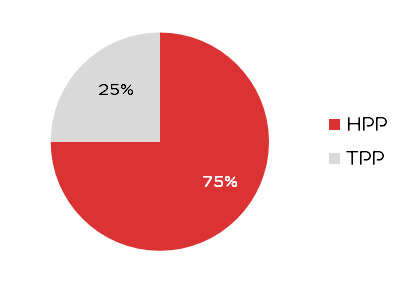 Click here to view the table containing some of the main financial and operating indexes for the indicated periods.

By integrating these businesses, the company is able to capture operational and financial synergies, as well as mitigate the energy and hydrological risks. The energy commercialization business allows the retention of distribution clients that may have an interest in migrating to the free market and ceasing to be part of the distributors’ captive consumer base. Commercialization also facilitates the management of risk and the company’s strategy of seasonalization. In turn, generation, transmission and distribution have significant financially complementary aspects permiting cross financing and making for greater cash flow stability and growth potential.

EDP Energias do Brasil has long-term regulated assets in the distribution, transmission and generation segments with a built-in natural protection against inflation given that the concession agreements provide for the annual restatement of revenues against inflation indexes. Thus, any variations in revenue which may occur, reflect only the rules and risks themselves inherent to the business.

In the case of distribution, revenues are readjusted annually against inflation indices, discounting the productivity of each concession and with tariff revisions every three years (EDP Espírito Santo) or four years (EDP São Paulo) to reflect the evolution in cost efficiency and return on capital.

The transmission segment has Annual Permitted Revenue adjusted annually for inflation, in addition to not having risks linked to volume.

Generation assets have the right to sell the energy corresponding to a physical guarantee of its plants for the period established by the granting power through the intermediary of long-term agreements, prices for which are readjusted annually against inflation.

More detailed information on the concession terms of EDP Energias do Brasil’s assets may be found in the business segment section of the site.

Experience in the Development and Operation of Generation Projects

The expertise of the Controlling Group, EDP Energias de Portugal and the experience acquired by the company itself in Brazil in the development and operation of generation projects such as Lajeado HPP (903 MW), Peixe Angical (499 MW), Santo Antonio do Jari HPP (393 MW), Cachoeira Caldeirão HPP (219 MW), São Manoel HPP (736 MW) and Pecém I (720 MW) demonstrate the ability of the group to be an operator with proven superior execution of their projects, enabling it to take advantage of new opportunities in transmission projects.

The investment strategy for generation always involves taking shareholding control and management of the project or, in some cases, through the shared control of projects with power purchase agreements.

In 2014, we decided to focus our strategic on Generation segments in which the Company has distinctive competencies. We defined that EDP would be positioned as reference as a Hhydrothermal operator, and therefore we decided to sell our minority stake in EDP Renováveis Brasil, concluded in 2015.

In addition, we made the announcement of the purchase of the additional 50% of Pecém I TPP, completed in May 2015, which was a movement concatenated with the sale of the stake in EDP Renováveis Brasil, completed by the end of the same year. It was a decision strategy to extend our presence in the thermal energy, essential source for energy security of the country.

In 2015, we reviewed our portfolio in order to maintain syrnergy of generation assets. The hydrogeneration assets are concentrated in five states (Amapá, Pará, Mato Grosso, Tocantins and Espírito Santo), exclugind SHPs, Costa Rica and Pantanal’s assets, that are located in Mato Grosso do Sul. With this vision in mind, EDP Brasil decided to divest its participation in Small Hydroelectric Power Plants and focus on medium-sized assets (between 100 MW and 1,000 MW). This process of capital recycling was completed in December, 2018, with over R$ 2.0 billion worth of value creation.

In 2016, we entered into two new business segments. On the one hand, we have taken our first step in the transmission segment, conquering a small 113 km project in the state of Espírito Santo. We understand this step, such as opening a door to a new business area.

It was also the year we launched the distributed generation business with solar photovoltaic.

For the EDP Group, 2017 saw the beginning of a new cycle of growth in our operations, reinforcing investments along all the segments of the value chain and extending our geographic footprint throughout the national territory. It was in this same year that we consolidated our position as a significant investor in the business of Transmission. As the leading successful bidder at the 05/2016 Auction alongside with the Auction from 2016, we committed to invest R$ 3.1 billion over the next years in nearly 1,300 kilometers of transmission line in the states of Rio Grande do Sul, Santa Catarina, São Paulo, Minas Gerais, Espírito Santo and Maranhão, guaranteeing attractive returns to our shareholders. In December 2018, following the example of consistent execution already seen in the generation projects, Espírito Santo transmission line went into commercial operation 20 months ahead of schedule.

In the Distribution segment, we grew our presence with the acquisition of a 23.6% stake in CELESC, in Santa Catarina, becoming the shareholder with the largest share on its total capital. This movement allowed EDP to expand into a new geography with favorable business environment and market growth, as well as new investment opportunities through presence in the state.

Our control of manageable costs has remained relatively stable over the past years when compared with the trend in gross margin. This is a demonstration of our performance and capacity to optimize resources, our efforts to simplify corporate structures, the efficiency of processes and rationalization  of corporate posts in the corporate hierarchy.

Launched in August 2015, the Zero Based Budget (ZBB) program covers all PMTO expenses of EDP Brasil and has contributed to the culture of continuous productivity, high efficiency and superior results, where earnings are reinvested in initiatives of revenue generation growth.

The ZBB methodology is applied both in budget planning and in control and monitoring through the Business Planning and Consolidation (BPC) system for 11 expenditure categories, which are subdivided into more than 50 subcategories. The program had the direct involvement of 49 employees, who were Vice Presidents, Directors, Managers, Specialists and several other facilitators, who were organized in different roles and responsibilities in the OBZ Governance model in the EDP Brazil group.

Since its implementation, the OBZ represents gains of more than R$ 266 million.

In addition to the solid capital structure, EDP Energias do Brasil has low levels of debt and a growing cash generation, reflecting the positive evolution in operating revenues, EBITDA and dividends paid out.

Net outstanding debt (short and long-term loans and debentures less cash and cash equivalents) on December 31, 2018 was R$ 4.4 billion (excluding the debts of Santo Antonio do Jari HPP, Cachoeira Caldeirão HPP and São Manoel HPP), that is, 1.6 times the EBITDA for the past four quarters.

Considering the proportion of EDP’s participation in 50% of Santo Antônio do Jari HPP and Cachoeira Caldeirão HPP, and 33.3% in São Manoel HPP, the net debt / EBITDA was 1.9 times.

The perception of credit quality from the point of view of the rating agencies, capital markets and bank debt market has been consistently solid.

The solid capital structure and credit capacity are group advantages since they allow growth strategy to be implemented at reduced risks, more especially in the generation segment.

We are controlled by the EDP Group, a solid global group with a vast experience in the areas of energy generation, distribution and commercialization and the fourth largest group in the Iberian Peninsula in the energy sector and one of the largest private sector groups in Portugal (see market value).

The EDP Group, with a track record of a long-term commitment to Brazil where it has been for  over 20 years, adds value and credibility to our business. It has the added advantage of holding an outstanding worldwide position in wind energy as well as its internationally recognized social and environmental policies  (the EDP Group is a component of the Dow Jones Sustainability Stock Index).

Additionally, our management in Brazil has significant experience in the electricity sector, is highly focused in the efficient management of our assets, the creation of shareholder value and is guided by the highest standards of corporate governance.